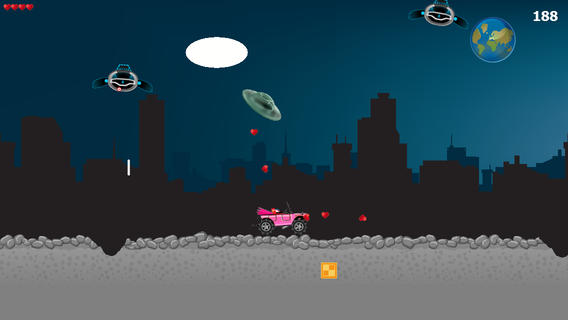 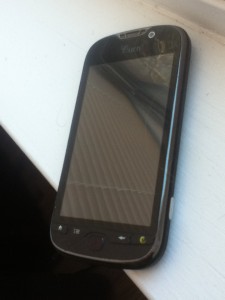 It plays Angry Birds. That’s all that was important in 2010.

This phone is three years old. Don’t believe me? Let me tell you about this phone.
I got it in Christmas 2010. I had decided not to buy a smartphone until 4G rolled out, and this turned out to be an excellent decision. This phone was the absolute top of the line back then– Android 2.2 (later upgraded to 2.3.4), 1 Ghz single core, MyTouch 4G (made by HTC). It is starting to show its age, hardware and software wise, but physically it looks brand new.

What’s my secret? First off, let me tell you what I didn’t do. I have never once used a screen protector on this phone. I have never used a bumper case of any kind. I’ve carried this phone in my pocket every single day for 3 years, and there’s barely a scratch on it, and the screen is perfect. All I did was follow common-sense notions of how to treat a smartphone, basically. Stuff like, I dunno… don’t put it in the same pocket as your keys; don’t put it in your back pocket; hold onto it firmly at all times; keep out of reach of pets and children. Do these things, and you will not need any extra crap tacked on to your stock phone. Treat it for what it is, a $500+ fragile box of awesome, and it will treat you well in return.

All that said, I really need to upgrade to something new. At this point in time I’m considering a Moto X, a Galaxy S4, a Galaxy Note, or an iPhone 5C. But if I wait until the holidays, I could probably Get a Galaxy S5 by then (64 bit, I bet). Basically I want something with a massive screen, newest Android, and excellent processing power.

So I was kidding about the iPhone, of course.

Have you ever wondered what it’s like to fire weasels out of cannons at extreme velocities? Then check out my new game, The Legend of Grease Weasel, available now on iTunes, Google Play, and Amazon Appstore!

While you’re at if, if you’re using a Kindle and want to check out my games, all of my apps are now available on the Amazon Appstore (except for SoulTrade… yeah, they didn’t like that one).

Grease Weasel has actually been done for 6 months or so… I dunno why I’ve been sitting on it all this time, but there you go. It really needs more stuff added, like a “how to play” screen. Pro-tip: press anywhere on the screen when going downhill to speed up. That’s pretty much all you need to know.

Another day, another app. This week, it’s my Magic 8 Ball clone, The Icosahedral Fortune Telling Apparatus. This app actually has a long, complicated history. It was orignally called “Magic 4 Ball” but that didn’t please Apple and Mattel. After 3 name changes, it became this ridiculously long, generic name (abbreviated as TIFTA) to eliminate the possibility of trademark infringement. Moreover, the 4 ball shape was eliminated from the list, and it finally passed review. And it’s a good thing it did, because the next name was going to be abbreviated “FMATTEL”.

So there you have it, after over a year of trying to get this small, lame app through the App Store, it’s finally here. Not really worth the wait, but oh well. Sometimes more important things get in the way of progress. This was the first game app I ever wrote, so go easy on me.

As you might have guessed, I’ve been working on another app these past few weeks. This represents only 2 weeks of work, so overall I’m okay with how it turned out. Without further ado, I present:
SoulTrade (soultra.de)
(available for iOS and Android!)

What is SoulTrade? It’s a market for buying and selling souls, basically. Yeah I know, it’s a pretty stupid idea, but I mostly just wanted to flex my design and development muscles with some of my free time. I really didn’t care what the website did, as long as I got to use PHP/MySQL/jQuery/Javascript/HTML5/CSS3. So ironically, this project really has no soul, heh.

Technical details: SoulTrade was written by me in 2-3 weeks with a PHP/MySQL back end using my own framework. The front end was designed by me in Photoshop and Dreamweaver, and of course utilizes HTML5/CSS3/Javascript/jQuery. The website is running on a LAMP stack, while the mobile version is using jQuery Mobile and Phonegap.

So Apple called me to personally reject my newest app.

Not surprisingly, they don’t believe my app is really doing anything. In a way, they’re right, I guess. Basically, what the app does, is it matches people who want to buy human souls, with people who want to sell them. People pay money for human souls, that’s what it does, but it also doesn’t involve any sort of tangible transaction, and Apple’s problem is they don’t want users involved with metaphysical transactions. They also said souls don’t exist and they cannot be sold (how dare they say this to a Doctor of Metaphysics, haha). So there you have it; if you ever wondered if Apple believes in souls… no, they don’t.

You know, I’m not even going to rant about it… I’ve been doing way too much ranting these days. I guess I’m just disappointed that they disagree that the app does anything. I saw the rejection coming a mile away, I just didn’t know which part of the guidelines they were going to dig up to keep it from hitting the App Store. It took them 3 weeks to figure it out, heh. So no, I’m not going to get angry about it, because I find it way more amusing than anything else.

Unfortunately, I’m not sure there’s a way to go forward with this project without it getting rejected again. Either you believe the soul transaction is ocurring, or you don’t. Apple says if the business model changes they will accept the app, but I’m not really willing to do that. Therefore, I will no longer pursue publishing this project on the App Store. I may, however, attempt to create a bookmarkable web app to circumvent the App Store.

Look for a new app announcement within the coming days…

Submitting an App to the App Store

I guess this should be a great hint of what I’m working on right now.